Origin of Coat of Arms - KwaZulu-Natal

KwaZulu-Natal waited a full decade before adopting a new coat of arms. At the time of writing, the registration process was not yet complete, so the official blazon had not yet been released. The blazon has, however, been prepared in both English and isiZulu – the first time any coat of arms has been officially blazoned in South Africa, in any language besides English and Afrikaans.

An Nguni shield argent, a strelitzia flower proper, within a border dovetailed and conjoined with a fess dancetty enhanced, both vert; upon a chief azure fimbriated argent, a mullet also argent. Behind the shield an assegai sable, its spearhead proper, and a knobkierie also sable, crossed saltirewise. 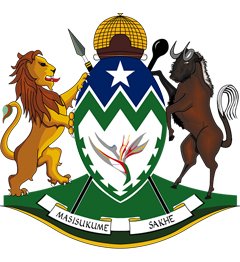 Dexter a lion and sinister a gnu proper.

Arms explained: The choice of shield shape is highly appropriate: an Nguni shield, reflecting the military traditions of the warrior amaZulu and their predecessors. Its shape is that of two parentheses: ()

Nguni shields have frequently been applied by European heralds in African circumstances, on the grounds that this is an African shield shape, but frequently inappropriately, since the countries for which they have been used either have had entirely different shield traditions – for example Botswana – or have only peripherally been influenced by Nguni invasions.

The shield shape was used by abeNguni long before the time of Shaka, but was then applied to a tall shield at least 2m high, behind which the warrior hid, while long spears were thrown at him.

Shaka's reform abolished both long shields and long spears, replacing the spear with the short stabbing spear or assegai, and reducing the length of the shield to about a metre, so that it was only of use in hand-to-hand fighting.

Even shorter shields, some only 300 mm in height, are traditionally used in stick-fighting, the traditional sport of young Nguni men.

The shield is traditionally made of cowhide, or the skin of some other hoofed animal, and reinforced with sticks. When the shield is not in use, on parade, or in a fighting situation, the sticks are removed for easier carrying.

The sticks are held in place with thongs, which are often in colours contrasting with the rest of the shield. Such thongs can be seen in the Nguni shields, used currently by Gauteng and formerly by KwaZulu, but are absent in this example, as the shield area has been filled with charges in a manner more traditional in the West.

The principal charge is a flower of Strelitzia reginæ, commonly known as the crane flower or bird-of-paradise flower. It is indigenous in the warm valleys of Zululand near the sea, but does not occur naturally in the old Natal Colony south of the Tugela River, although it is found in Transkei and as far south in the Eastern Cape Province as Humansdorp. It is nonetheless widely planted in gardens in Natal, as in other parts of the world – it is officially a symbol of the City of Los Angeles in California – and also grows wild, having seeded itself out of formal gardens.

At least one other species of Strelitzia is also found in KwaZulu-Natal, namely Strelitzia nicolai , which grows to a height of 6m and is easily mistaken for a banana tree – in fact, its common name is Natal wild banana. When it blooms, it cannot be mistaken, since its flowers – at least twice as large as those of S reginæ – are clearly of the same form, although their colouring is cream where the crane flower is orange, and purplish-black where the crane flower is green and blushed.

The crane flower (S reginæ) was the official floral emblem of the Province of Natal.

The fess, with its jagged outline, represents the Drakensberg range – these mountains border the province along its boundaries with Lesotho and the Free State.

Green is the overall colour of the landscape in KwaZulu-Natal.

Crossed behind the shield are an assegai and a knobkierie, both traditional symbols of chiefly authority.

The crest is a beehive hut, the traditional structure used in erecting the homes of the abeNguni. A homestead is generally composed of several such huts, one for the male head of the household, and one for each of his wives and their respective children. Although the amaZulu have largely abandoned this type of hut, they are to be seen in the historic village that has been erected near the site of Shaka's kraal, at Mgingindlovu.

Huts of this type were also typical of the southern Nguni, of what later became Transkei and Ciskei, but the style was largely abandoned in that region about a century and a half ago. An example of the style can nonetheless be seen in the seal of King William's Town, which was the capital of the Colony of British Kaffraria.

The dexter supporter is a natural lion (Leo leo), taken from the arms of KwaZulu, and represents the authority of the Zulu king.

The sinister supporter is a black wildebeest or gnu (Connochætes gnou), a pair of which had been part of the symbolism of the Colony and Province of Natal since 1870, and part of its coat of arms since 1907. In these arms, for the first time, the animal is shown as being rampant, rather than courant (running) – although they are actually blazoned as being in full course at random.

During the first 10 years of its existence, KwaZulu-Natal used the arms of both Natal and KwaZulu, placed side by side, to represent the province.

The province formally came into being on 27 April 1994, when all-race elections were held for the first time in South Africa. Since it was a merger of the former Province of Natal and the non-independent homeland state of KwaZulu, it was named KwaZulu-Natal. It is headed by a Premier, elected by and from the Provincial Legislature, who is assisted by an Executive Council chosen from the Legislature.

It was formed out of the former Natal Province and the non-independent homeland state of KwaZulu, plus the part of the Piet Retief district (from Transvaal Province, now in Mpumalanga) that lay to the south of Swaziland, on the banks of the Phongolo River.

The district in dispute is Mount Currie (or Griqualand East; district seat Kokstad). The retention of this district by Natal, despite the claims of Eastern Cape, mean that the Eastern Cape district of Umzimkhulu is separated from the rest of that province by KwaZulu-Natal territory.

The province inherited two capitals: Pietermaritzburg, first established as the capital of the Republiek Natalia, and Ulundi, seat of the KwaZulu legislature. The provincial legislature did not make a decision on which to use until July 2002, when a vote was taken in favour of Pietermaritzburg.

KwaZulu-Natal is the only province of South Africa that has grown consistently since 1843, when it (as Natal) was occupied by British forces and had its north-eastern border fixed on the Thukela River (abandoning land as far north as the Black Mfolozi, claimed by the Republiek Natalia).

Natal was formally annexed as a district of the Cape Colony in 1844, and also had its southern boundary fixed on the Mzimkhulu River. In 1856 it was separated from the Cape and became a separate colony, and 10 years later it annexed land between the Mzimkhulu and Mtamvuna rivers as Alfred County.

In 1903, in response to Natal's claims for war reparations, three districts of the Transvaal Colony (previously Zuid Afrikaansche Republiek) were added to Natal: Utrecht, Vryheid and Paulpietersburg (these last two were what was left of the Nieuwe Republiek).

The only time Natal became smaller was during the 1970s, when KwaZulu acquired its own legislature and was effectively (although not formally) separated from the Natal Province.

In 1976 Natal received Griqualand East from the Cape Province.

In 1994 KwaZulu and Natal were reunited and gained the Phongolo River panhandle from the Transvaal. Since it effectively retained Griqualand East, the province has retained every gain made since 1866.

Names and languages of the province

The languages chiefly spoken in KwaZulu-Natal are isiZulu (see Natal Colony for a discussion of this), and English. Afrikaans is a majority language only in the north-westernmost parts of the province.

The province's name appears above in all three languages. The word iPhondo (province) is also found in the Xhosa names of the Eastern and Western Cape provinces. The prefix “kwa-”, meaning place or land, is pronounced in isiZulu as “ghwa-”, not “kwa-” as in isiXhosa.

None other of South Africa's 11 official languages are spoken by large communities, but there is a substantial minority speaking a variety of Indian languages, descendants of the indentured labourers that entered Natal during the second half of the 19th century (largely from south India) and of the so-called passenger Indians, merchants from northern states, chiefly Gujarat.

Zulu is by far the majority language in the province as a whole. There is also a minority of urban Bantu-speakers who use other languages, chiefly isiXhosa-speaking amaMpondo from Transkei. English is spoken by the majority of city dwellers, and by the highest proportion of farmers anywhere in South Africa, especially along the coast and in the Midlands. Most Indians have English as the language they use outside their homes, but their home language often depends on their religion. Christian Indians are largely English-speaking; Hindus speak a variety of Indian languages, but in Natal largely Tamil, and Muslim Indians largely speak Gujarati or English, with Arabic as the language of their religion.

The province's population was formerly legally classified according to race: black (literally “Bantu”, covering abeNguni and minority black groups), white and Asiatic (mostly Indians, but including a few Chinese). There is a small Coloured community, except in Griqualand East where there is a large Griqua community (which was classified as a sub-group of Coloured).