As Capital of KwaZulu-Natal, the city is an administrative and industrial centre

Wattle, bark extract, furniture, footwear, aluminium, chocolate and cloth. Motor vehicles are assembled in the city, and iron ore is mined nearby

Pietermaritzburg is the seat of the University of Natal (1909), a technical college, the Natal Museum and the Tatham Art Gallery

Points of interest include the Church of the Vow (1839), built to commemorate the 1838 Boer victory over Zulu forces; Fort Napier, erected by the British in 1843; and the Provincial Council Buildings.

The Comrades Marathon takes place annually, in June, between Pietermaritzburg and Durban. It has been run since 1921 and attracts thousands of entrants. The start of the race alternates between the two cities.

In January there is an annual canoe race, Dusi Canoe Marathon, from Pietermaritzburg to Durban. The route follows the Msunduzi River into the Mgeni River, through the Valley of a Thousand Hills into the Inanda Dam and from here to the mouth of the Mgeni River.

The Midmar Mile is one of the largest open-water swimming events in the world; taking place at Midmar Dam, north of Pietermaritzburg in February every year, it attracts over 16,000 swimmers from around the world.

The most prominent soccer club is Maritzburg United. The club was relegated from the Premier Soccer League after the 2006 / 2007 season, and it currently competes in the Mvela Golden League. 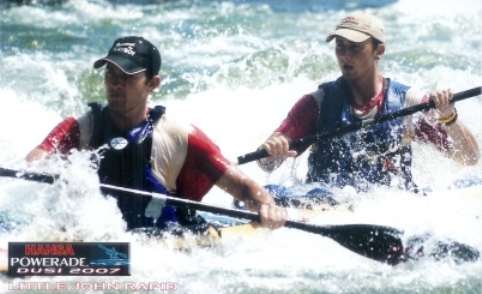 The Pietermaritzburg Oval is considered one of the most picturesque cricket grounds in South Africa, and it hosted two matches during the 2003 Cricket World Cup.

Pietermaritzburg cricket ground is notable as one of the two grounds used regularly for first-class cricket that have a tree within the boundary (the other is St Lawrence Ground in Canterbury, Kent).